Inspired by the fact that Cyprus is one of the first wine producing countries and with the advantage of owning a traditional Cypriot building that has been in my family for generations, instigated the creation of The Cyprus Wine Museum as tribute to this integral part of the history of the island.

Erimi village, with its 5500 years history of wine making, is at the crossroads of the wine routes of Cyprus, in close proximity to the prehistoric settlement of Sotira, where the oldest remains of grape seeds have been found and near to Kollosi Castle, a medieval Commanderie of The Hospitaller Knights that give the name to the Commandaria Wine first produced by them, gives to Cyprus Wine Museum its perfect location.

I welcome you to enjoy our Museum through centuries of wine appreciation! 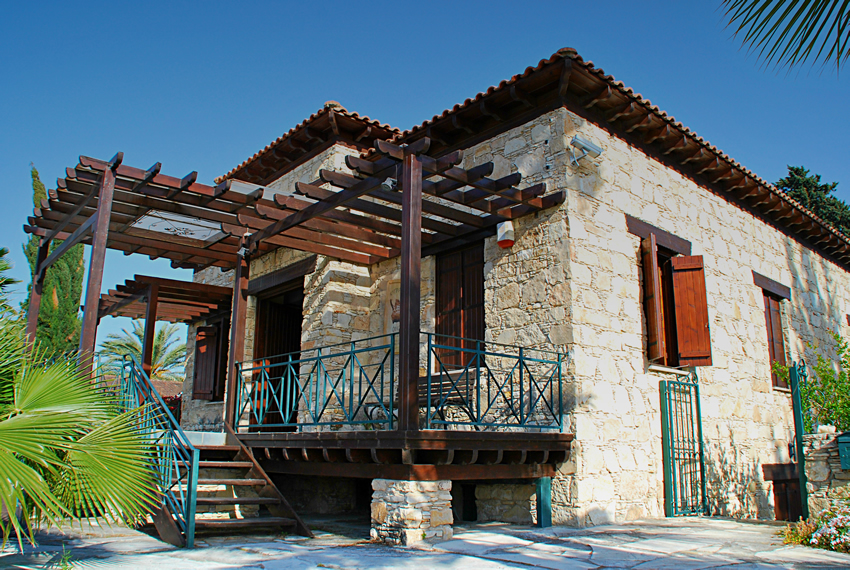 The Cyprus Wine Museum started operation in November 2004, after 6 years of hard work (1998-2004) in restoring, expanding and decorating the 150 year old stone building.

Originally the building was an inn, where the wine merchants from the wine villages of Lemesos and Paphos used to meet, and overnight on their way to Lemesos main market. It is therefore quite certain that wine was enjoyed in the building in quantities over the last 100 years.

During the renovation period we had no way of knowing the significance of the site we had chosen for Cyprus’ only wine museum. After the Museum inauguration, evidence came to light that Erimi, the village where we stand, is the starting point of the cultivation of grapes and production of wine in Europe with history more that 5500 years.

Archaeologists in 1933 had excavated the Chalcolithic Period settlement of Erimi. There were many objects found in the round houses remains. The most important fragments of pottery belonged to 18 pointed base flasks.

The archaeologist on duty was late Porfyrios Dikaios, father of Cypriot archaeology, who quickly realized that these were of significant archaeological importance. Due to lack of laboratories in the museums of Cypurs and because the equipment he was using was basic, he couldn’t answer three important questions about the shape, the use and the content of the flasks. Since he wasn’t able to give answers to these questions he did something which proved invaluable to Cyprus and The Cyprus Wine Museum later on.

Dionysus, also known as Bacchus, in both Greek and Roman mythology, the Thracian god of wine, represents not only the intoxicating power of wine but also its social and beneficial influences. He is viewed as the promoter of civilization, a lawgiver, and lover of peace – as well as the patron deity of agriculture and the theatre. He was also known as the Liberator (Eleutherios), freeing one from one’s normal self, by madness, ecstasy, or wine. The divine mission of Dionysus was to mingle the music of the flute and to bring an end to care and worry. There is also an aspect of Dionysus on his relationship to the “cult of the souls”, and the scholar Xavier Riu writes that Dionysus presided over communication between the living and the dead.

The Greeks used to drink only diluted wine (kekramenos oinos). The first goblet of wine offered, was not diluted (akratos oinos); however this was not intended for consumption and was poured on the floor as an aid to prayer to Dionysos. The second goblet was offered (diluted) in order to prepare symposiums for spiritual conversation. The third goblet was offered in order to prepare their stomach for a substantial meal, and the last goblet offered was intended as preparation to retire to bed.

The House of Dionysus in Paphos illustrates in mosaic form the importance of the vine and wine in Cyprus during the Roman occupation of the island. The principal hall, the triclinium, is decorated with a carpet-like mosaic floor representing vintage scenes, vines laden with grapes and humans and Εrotes picking the fruit. Apart from the many representations of the god of wine Dionysus, the most prominent panel of the west portico depicts the story of the first wine drinkers.

Wine and the symbolism of vineyards have a special place in Christianity as well. In as much as vineyards and their cultivation are a part of daily life, so are wine and vineyards part of the teaching of the Christian faith.

Together with consecrated bread and olive oil they form the Holy Trinity, which Orthodox Christians treat with respect and affection. Wine symbolizes the blood of Christ and the Holy Communion, while vineyards symbolize the world and the faithful. Wall paintings often depict the mystery of the Holy Communion during which wine is transformed into Christ’s blood, while churches are often decorated with vine leaves.

The Byzantine era ceased in Cyprus in the 12th century. After it was conquered by King Richard the Lionheart, Cyprus was sold to The Knights Templar who set up their headquarters at the Kolossi Castle for a year until 1192 when the Lusignans took possession of the island.

Years passed and they did not succeed, until Peter the First de Lusignan, King of Cyprus, took a realistic approach on their crusade attempts. He understood that Cyprus alone did not have the strength, so he set about on a journey around Europe raising awareness, funds and support for the crusade.

When he arrived in London he was received by Edward the third, King of England, who wanted to help him and thus invited the Kings of Denmark, Scotland and France to give King Peter the opportunity to discuss his crusade with the four kings at the same time.

The former mayor of London had arranged a banquet for the five kings. The wine consumed at this well documented banquet was Commandaria. This was significant as it was the first time Commandaria was tried abroad, and was the beginning of its popularity throughout Europe.

The mural displayed in the Cyprus Wine Museum is a copy from the mural that is housed today in the Royal Exchange in London. It depicts the ‘Banquet of the five Kings’ during the visit of Peter A’, King of Cyprus, to London in 1363, when he wanted to convince the other European Rulers to help him organize a crusade. The mural is reproduced for the Cyprus Wine Museum by courtesy of the Joint Grand Gresham Committee.

The traditional wine presses were used on the island since the beginning of wine making. Here at the Wine Press of Lania, one can see the powerful double horizontal beam, the Mouklos, acting as a lever, a large screw at one end of the beam and a heavy stone attached at the base of the screw, acting as counterweight. The grapes were pressed on an elevated stone built press bed, the Djiafi. The grape juice ran from the press bed into an earthenware vessel (The Podoshi) and from there it was transferred into the large jars (the Pitharia) where the fermentation took place.

A rather simplified way of making grape juice involved the crushing of the grapes n a grinder, the Alestra placed over a large wine jar. The grinder consists of a wooden trough inside of which, two cylinders with iron spikes are found. When set in motion they crushed the grapes, which fell into the jar beneath. Skins and must were then left in the jar together until fermentation was complete, at which point the new wine was strained and transferred into clean jars, where it was left to mature.

Potters from Kornos and Phini fabricated the large terracotta jars Pitharia which were used exclusively for the storage of wine.

They used the clay that was found around their village. The potter (male) began building his jar from the bottom. He made the basis of the jar and laid it in a little ditch, or on a straw basket. Every day the potter added a different layer (Fitili) to the jar. This process lasted 40 days. When the middle of the jar was reached, the potter added from the outside the ‘Zonari’, a clay belt, that protected the jar that was to be rolled on the ground later on. The Pitharia when finished were fired in a special kiln for three days.

The Alembic apparatus, consists of a bronze cauldron in which a mixture of pressed grape skins, stalks and pips (the zivana) boil, a heavy semi spherical lid made of metal and fired clay, a long tube passing through a large jar filled with cold water, and a vase for collecting the eau de vie.

The Alembic is usually placed on a simple hearth outdoors. Zivania, the strong eau de vie, is produced from the distillation of fermented grape pulp discarded during the wine making process. The steam from the boiling zivana escapes through the tube, which is immersed in cold water. It is thus condensed and Zivania is collected in a jug placed at the end of the tube.

On the lower ground floor is ‘The St Hillarion Hall’ -the wine tasting-room and the ‘Cyprus Wine Routes’ display with wines from the various wineries of Cyprus.

It is here that visitors can relax and enjoy a unique oenological experience through all the senses with the exclusive lines of products by the Cyprus Wine Museum Senses, and learn about the grape varieties and the wine regions of Cyprus.

On the lower ground floor is the wine tasting-room –‘The St Hillarion Hall’, with wines from 38 wineries of Cyprus, displayed in a series of alcoves in the stone walls and the serving bar is made up from large wine casks.

Visitors can wander from the wine-tasting room out into the traditional eastern courtyard where there is a display of traditional equipment that includes the stone pits where the grapes were crushed, the distillation equipment used for making the traditional spirit Zivania and a number of Pitharia –the red clay jars in which wine was fermented and stored.