Sonata for viola and piano op 147 was the last work composed by D. Shostakovich. It was completed just few weeks before his death and it is dedicated to violist Fyodor Druzhinin. It’s dark in tone and unsettled in mood, but tempered by an air of resignation, most strongly felt in the slow finale, with its haunting references to the Beethoven’s Moonlight Sonata. Writen in three movements it is a music narrative of epic proportions and surly one of the most significant from the pieces written for the viola repertoire.

Sonata for violin and piano op 80 by S. Prokofiev written between 1938-1946 (completed two years after his 2nd sonata) is one of the darkest and brooding of the composer’s works. It was premiered by D. Oistrakh (to whom the piece was dedicated to) and Lev Oborin in 1946 under the personal coaching of the composer.Cast in four movements of approximately equal length and lasting about a half-hour, this tormented Sonata for violin and piano, often called as “the great sonata” must rank as one of the most important works, in any genre, of Prokofiev’s music.

There is something deeply disturbing, and at the same time uplifting in this timeless work. It combines angst-ridden weight with vigorous spirit and blissful moments of timeless beauty. First and third movement of the sonata were performed at Prokofiev’s funeral by D. Oistrakh and S. Feinberg as the composer’s true epitaph.

SORIN ALEXANDRU HORLEA – Violin
was born in Bucharest in 1975 and started the violin
at the age of eight. He graduated from George Enescu Music High-School where he studied under maestro Octav Savitchi and Ciprian Porumbescu Music University where his Professor was maestro Daniel Podlovschi. He took part in summer-courses and masterclasses with Viktor Pikaizen, Sherban Lupu and Eugen Sarbu. In 1997 he won the third prize at the George Enescu Childhood Memories contest in Bucharest. During his university studies he played in the Radio Chamber Orchestra, Philarmonia Chamber Orchestra and in Bucharest Opera, but mainly in George Enescu Philharmonic. In 2000 he moved to Lebanon to fulfil his position in Lebanese National Symphony Orchestra, where he became the assistant concert master.

He moved to Cyprus in 2005 and since then is a member of the Cyprus Symphony Orchestra. He is also working as an associate teacher of the Cyprus Youth Orchestra. Alongside his output as an orchestral musician, he is an active performer as a soloist and in various chamber groups throughout Europe and Middle East, playing not only classical but also jazz and folk music. He was a member of Cyprus String Quartet and the folk band Danube Quartet. He regularly performs contemporary music as he is a resident musician at the Avaton Festival in Limassol, a member of the Chronos Ensemble, and of the Ensemble Cyclamen.
Sorin is playing on a modern violin by Stephan Sultanian.

ANITA TOMASEVICH STAVROU – Piano
Anita Tomasevich performed in some of the major halls in The Netherlands, Spain, London, Italy, Russia and Serbia. She is a laureate of international competitions, including 1st price in Citta di Tortona Italy and she appeared regulary on Serbian National Radio and Television. She studied in the Music Academy in Novi Sad, Royal Conservatoire in Den Hague and was excepted for the PhD studies at the Royal Academy of London. She studied with renowned teachers such as Jegor Chugayev (student of Y. Milstein), Svetlana Bogino (student of L. Oborin) and Vladimir Ograkov (student of E. Gilies) Marcel Boudet and Ellen Corver (student of K. Stockhausen). Yelena Richter, Lazar Berman, Geroge Sandor (student of Bella Bartok) and Stefan Vladar.

In 2005 she released her first CD recording with works of Scarlatti, Chopin, Scriabin and Prokofiev. In 2006 her career as a concert pianist was stopped by the spinal injury. After almost ten years of recovery, Anita started perfoming again, both solo and chember music, receiving excellent reviews.

During season 2016/17 she had series of recitals in Cyprus, Italy and Holland and for the seasons 2018 /2019, she will perform solo and chamber music recitals in Serbia, Holland, Cyprus, Greece and Germany.

As a chamber musician, Anita forms a piano duo with an established Dutch pianist Eke Simons and with the Romanian violinist, residing in Cyprus, Sorin Alexandru Horlea.
Anita was founder and the Artistic Director of the “Avaton Music Festival” which received international acclaims. 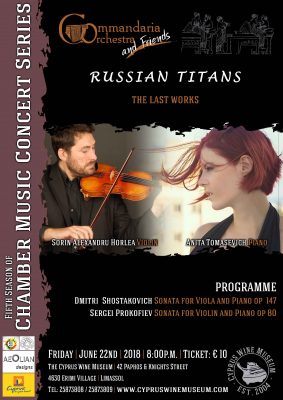